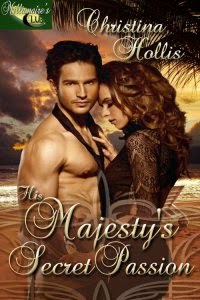 Leo Gregoryan’s determined to be the perfect king. Loyalty to his country means sacrificing his own happiness, but he’ll divert the energy he once poured into his dream of becoming a doctor toward royal duties. All he needs right now is a stress-free vacation–no future queen need apply.

Sara Astley escapes to the luxurious Paradise Hotel after she’s dumped by her partner, who then stole the promotion she’d expected. She hides her broken dreams behind a tough exterior. Her stubborn streak makes her a challenge Leo can’t resist.

His special brand of hands-on persuasion seduces Sara into enjoying the holiday of a lifetime. Their fling can't hurt either of them–or so they think. Leo's focussed on being the ideal hero. Sara knows what she wants, and that’s independence. Then a revelation tears them apart, meaning things can never be the same between them...

WEIGHT OF THE CROWN

Weight of the Crown
By Christina Hollis
Book Blurb
Now duty is his only mistress!
For notorious playboy Prince Lysander Kahani, playtime is over…Left with a country to run, he draws the line at playing nanny to his orphaned nephew!
Instead he sends for a professional. But one glance at buttoned-up Alyssa Dene and Lysander’s wicked side re-emerges! Wary of his scandalous reputation, Alyssa tries to keep her distance – but Lysander draws her like a moth to a flame.
Lysander is fighting a battle between public duty and private desire, but he is determined to make Alyssa a royal offer she won’t refuse…

WEIGHT OF THE CROWN by author Christina Hollis is released by M&B Modern as well as Harlequin Presents.
Alyssa Dene is personally recommended as the best in the job and she takes on the duties of nanny to the orphaned nephew of Prince Lysander Kahani. Coming face-face with the Prince, Alyssa is aware of his playboy reputation but cannot help the flicker of attraction running through her!
Lysander meets a challenge! The previous nannies had come running to him to be consoled after his nephew threw tantrums. Yet Alyssa lays down strict boundaries for the little king-in-the-making, making Lysander back her up!
Will Alyssa manage to make the little Prince as well as Prince Lysander toe the line? How will Lysander combat his attraction to Alyssa as she seems unattainable? Alyssa’s refusal to be taken for granted was one of the reasons that had appealed to him. Women never refused him, ever. So how can he bring Alyssa to agree to a royal offer he intended making?
WEIGHT OF THE CROWN is a wonderful, sensual, tension-filled romance that I found charming, absorbing and moving. Christina Hollis is a terrific writer who creates likeable characters readers take to their hearts. It’s a beguiling and stirring story that is sure to tug at readers’ heartstrings and leave them with a great big smile on their face at the unusual ending.
She has delivered a yummy-to-die-for hero, a playboy Prince who turns to one woman only for true love, a strong, feisty heroine and rolled them in a story that is filled with emotion and sizzle!
Posted by Nas at 1:57 PM

Get your copy of...WEIGHT OF THE CROWN!

WEIGHT OF THE CROWN

On Tour With Christina...